The LAVr QH-7 chariot is a multi-functional speeder universally exploited by Imperial ground forces as a light assault vehicle. Designed during the Rebellion, it was born of the need for a diminutive vehicle that was dexterous and swift. Engineers found inspiration in the urgonox, now extinct, which was deceptively angular in shape. Native to Clak'dor VII, it was the genetically mutated descendant of the original urgrinox. The sturdy armour that enveloped its sensitive flesh is a direct parallel with the chariot's exterior plating constructed from an alloy of meleenium, rock ivory and lommite. The composite material satisfies the ultra-light yet reinforced parameters necessitated by the speeder's functions.

Despite its unique, streamline design, with the latest aerodynamic configuration, the chariot features a compartment overhead of eight meters, which permits it to navigate over landscapes with diverse topography. In addition to the frontal laser cannon, the installation of a retractable forward armour plate provides superfluous protection which can be adjusted by the vehicle’s control panel.

Although not meeting the top speed of other speeders, the chariot is able to maintain pace with other repulsor crafts in a battalion. It also carries a complement of strategic processors, multiple holoscreens and a long-range communications transceiver to stay in prolonged contact with other vehicles and hold a better structural formation for ground combat. The chariot has limited passenger and cargo space, but one would anticipate these restrictions in a speeder class vehicle.

Most of the chariot's exterior is laminated with solid quantum. Its weapons system is comprised of a single medium laser and countermeasure mechanisms, which provide some protection against electromagnetic ruptures. The communications array is equipped with subspace signal-scramblers for outgoing messages. The low frequency encryption is highly effective and ensures that, even if enemies manage to hack into the mainframe channel, only very advanced decryption programs would be able to decipher its fragmented language, and those are not typically found on other vehicles.

The chariot's unparalleled design allows commanders to cross into enemy territory with moderate protection, but it is also adroit in evacuating personnel from hot zones. It is a practical and convenient vehicle, frequently employed as a mobile command post on the battlefield and during reconnaissance operations. In modern warfare, the chariot is widely used not only by Imperial forces but many other large conglomerates and even small companies for relatively straightforward patrol, scouting and transportation duties. Although surpassed in many ways by newer speeders, the chariot still remains sought after for its reliability and unique abilities. 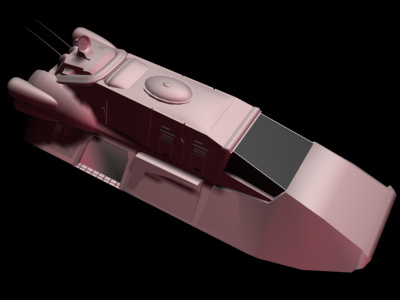