Using techniques as mysterious as those they employ to build their cities, the Gungans create the Bongo’s basic structure by growing it from a secret organic substance. As this material develops, it forms a remarkably sturdy frame. Being organically grown, the skeleton of the craft remains flexible, and so it is then covered with a hard hull that resembles a polished shell. Despite this extra protective layer, the bongo’s exterior remains vulnerable to damage by creatures that lurk in the galaxy's seas. So that it can travel more easily in the darkest underwater depths, the bongo is equipped with bioluminescent pods. These release organic light produced by electro sensitive mass and fungi.

The bongo's cockpit consists of a main bubble with enough room to seat four passengers. Flanking the cockpit are two further bubbles designed to carry cargo. These bubbles are maintained by the same principles that create the hydrostatic fields enclosing the Gungans' cities. Energy is released from a positively charged unit, located just beneath the cockpit, and then directed towards the negatively charged receivers placed beside the passenger compartment. When the hydrostatic field is activated, the bubbles are sealed, holding the air inside and the water outside. This energy field can be modified at will, but travelers new to the bongo may not be reassured to learn that only a thin film of energy separates them from the wideness of the sea and all its terrifying monsters. 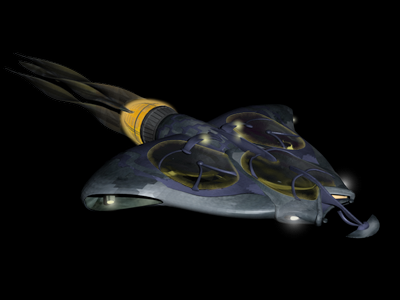