Almost anyone immediately associates Sandcrawlers with Jawas and Tatooine. Indeed, Jawas have played a significant role in making this vehicle among the best-known in the galaxy. What just a handful of people know, instead, is that Corellia Mining Corporation, founded during the early days of the Galactic Republic, initially designed and manufactured this behemoth. The corporation used this ore-hauling vehicle on every planet they colonised, and colonists reached Tatooine just prior to the Jedi Civil War, trying to exploit the desert to mine valuable resources. However, the planet's scans were inaccurate and the planet lacked profitable materials. The harsh environment compounded the problem, resulting in the contractors abandoning the crawlers to seek fortune elsewhere or become moisture farmers. The Jawas, capitalising on the giant vehicles dotting the planet's surface, then took over.

Jawas quickly adopted this vehicle and modified it to the point that the original purpose is now virtually undetectable. They named it "sandcrawler" and it turned out to be of utmost importance to their society and economy. Each sandcrawler provided a home to an entire clan, hundreds of Jawas, and offered protection from the violent sandstorms. These Jawas made a living patrolling the desert, searching for salvage such as droids, downed ships, and scrap metal, and processing it for later sale. As a result, the entire vehicle was designed around this lifestyle. The control cabin and spotter’s station were located high atop the front side, with a sensor array located just below the command centre, helping scouts to catch telltale glints of salvage. The squared niche centered on the side, which previously hosted the ore processor, was converted into fully-equipped repair shop. On each side there was also an extendable boarding gantry where wrecks were loaded by a salvage crane from the collapsible front loading ramp or, if the size was small enough, by using an extendable magnetic suction tube.

The vehicle was covered by a heavy armour plating that protected it from the elements, krayt dragons, and blaster rifle fire. It was difficult to slow down the vehicle with standard weapons, yet a precise shot to the drive motors could cripple the crawler. As a result of its size and immense weight, eight giant treads, four on each side, were needed to move this titan through the desert. This necessitate the inclusion of steam-powered nuclear fusion engines, located on the rear side of the vehicle.

Sandcrawlers themselves required constant repairs. Compared to current standards, the engines are outdated, and most systems seem ancient. The continuous movement through remote, harsh deserts, as well as the constant battering by sandstorms, have taken their toll on the vehicles’ overall condition. Despite these issues, production of these vehicles has re-commenced and the ground vehicle has spread throughout the galaxy. Corporations use it as an extended cargo bay for larger ships, while some others exploit its passenger capacity to move hundreds of commuters from their place of residence to work. These practical uses, albeit different from the vehicle’s original purpose, might be considered as an extension of the Jawas’ concept of home and work, and have helped cement the sandcrawler into the minds of sentients across the galaxy. 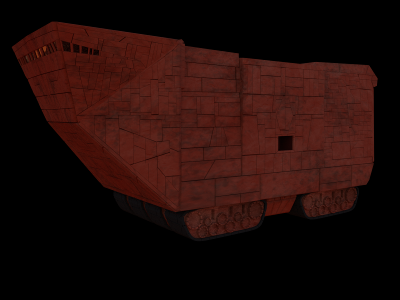