Legend has it that the first of these twin-fuselage air speeders was designed by a brilliant Duros pilot who had the misfortune to be married to a nagging spouse. After one particularly argumentative trip in their speeder, the pilot decided that she wanted to have some privacy. As murder and divorce were out of the question, she set about designing a craft where she could still fulfill her piloting obligations while remaining happily isolated from her partner’s incessant blather. The result was the first of these now-familiar air speeders. Some companies that make them still adhere to the original design specs where the passenger’s pod is not provided with a communicator.

Performance-wise, there is much to recommend the cloud car airspeeder. Its controls are simple and configured to enable any humanoid pilot to instinctively grasp the rudiments of piloting the speeder after minimal instruction. It possesses blazing speed and superb maneuverability, courtesy of a well-thought-out arrangement of thrusters and repulsorlift generators. The pods boast small compartments around the rear fuselage and along the supporting boom for custom arrangement of ballast, allowing the pilot to customize the balance of his ship to his liking. This is especially popular on the racing circuit, where skilled or crazed pilots push the limits of performance in stripped-down versions of this air speeder. Standard models of the air speeder come with a basic navigational assistance package including a terrain-following sensor to aid in safety. This is often the first piece of gear removed by the more skilled, or most thrill-seeking, pilots and their crew.

Apart from the racing version, an armed version of the air speeder was available from a number of manufacturers in the recent past. However, the addition of the light blaster cannons and their assortment of auxiliary systems degraded the performance of the vehicle to an unacceptable degree, and most armed models have had their armament removed and been transferred to non-combat roles or retired in favour of a dedicated combat airspeeder. The base model remains popular even now, several centuries since the first speeder rolled off the production line and manufacture shows no sign of ceasing. 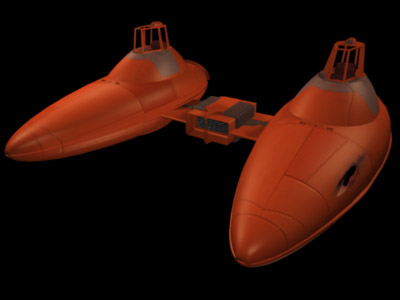