Though its origins are unknown, the AST-5, or Armored Sentinel Transport, has seen extensive use throughout the galaxy with bounty hunters, mercenaries, security factions and criminal organizations such as the Hutt cartels.

The AST-5 has surprising maneuverability, despite a low top speed. It also features two medium blasters; one mounted on either side of the cockpit. Each blaster is fitted with a rotating swivel which enables a 360 degree firing arc. The blasters, combined with an advanced sensor suite, make the vehicle is especially well equipped to locate and destroy targets in narrow confines, such as the courtyard of a lavish estate or a maze of urban streets. 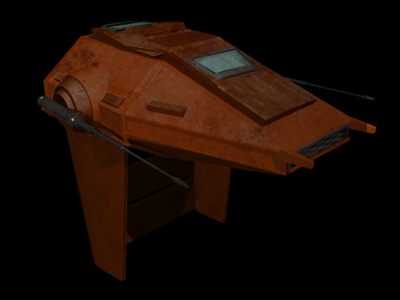