Stormtrooper armour is the standard military protective gear worn by Imperial stormtroopers, the iconic soldiers of the Galactic Empire. Engineered to mitigate damage from most weapons and safeguard the wearer against environmental concerns, the armour is made of eighteen individual pieces of white plastoid alloy attached to a fitted, black body glove, which makes it surprisingly flexible. Innovative technology is used in many aspects of the armour to aid the soldier in various combat situations, protecting them from battlefield hazards. While the white exoskeleton easily deflects low-powered blaster bolts, it can only offer limited protection against a direct hit from a powerful blaster. Additionally, the armour is a bulwark against kinetic damage, such as non-powered weaponry. The body glove, on board air filters, oxygen tank and manual environmental controls can seal the trooper away from extreme climate conditions, chemical and biological agents, radiation, and even the vacuum of space for a very limited period. In addition to the many protective systems designed for the trooper wearing this armour, an Identification Friend or Foe (IFF) transceiver is installed in the back of the suit so that units can transmit and receive encrypted identification signals to prevent enemy infiltration and signals-interception. All together, stormtrooper armour provides strong protection from a wide array of threats, while allowing those wearing it to maintain all their natural range of motion, making it one of the best armours in the galaxy today.

Originally a Kaminoan design worn by the clone troopers in the Grand Army of the Republic, the protective gear has been updated and enhanced since but retains the Kaminoan influence in its instantly recognizable white pigment. Coloured shoulder pauldrons worn by stormtrooper officers are the only outward shows of individuality among any particular kind of stormtrooper however, there are many types of non-standard armour made for different roles or environments. Some of these modifications include the scout trooper armour, which has major sensor upgrades, snow trooper armour, which enhances protection against cold and camouflages against snowdrifts, and dark trooper armor, which is retrofitted with a jet pack used to cover territory more quickly. While the Galactic Empire considers unauthorized possession of stormtrooper armour highly illegal, units have long been available in the galaxy's black markets. 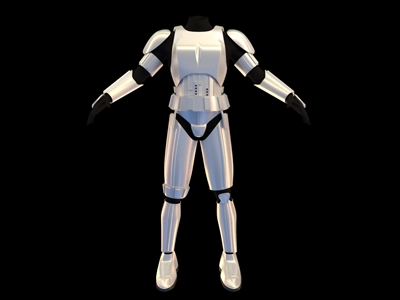