Among the most recognizable armours in the galaxy is that of the Imperial Royal Guard. The concept and design for the Imperial Royal Armour was greatly influenced by the armours of the Mandalorian Death Watch, the Senate Guards of the old Galactic Republic, and the Sun Guards of the Thyrsus system. All were elite units who invoked fear in even the most hardened of adversaries; a psychological effect upon which Imperial guardsmen sought to capitalize.

Aside from the head, the armour covers the entire upper body. A pair of molded plates guard the chest and are designed to absorb major impacts from brute force attacks and projectile weaponry. Across the abdomen are multiple layered and jointed plates which increase flexibility without sacrificing protection. Each shoulder guard has a double layered plating and is mounted so that a pivoting connection is maintained to the chest and back plates, along with the portion of the armour which encases the upper arms; maintaining excellent range of motion. The armour also extends down to the forearms, safely encasing them for use in parries and deflection of slashing attacks. The back plate is the foundation for all the pieces and is reinforced, unarguably making it the single strongest portion of the armour.

Beneath the armour is shock absorbent padding which increases protection against kinetic and concussive energy. This padding also makes the armour more comfortable when having to be worn for long periods of time. The armour can be worn alone, concealed beneath a tunic for clandestine operations, or with an attached cape or robe - lending a more stately appearance. The Imperial Royal Guard typically wears a cape over the armour and both are scarlet in color; though it can easily be painted to match the tactical environment or other requirement. 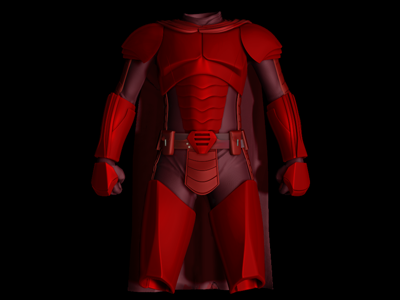