Rebel camouflage gear is mostly worn by Rebel soldiers of the Alliance military that are stationed in areas where blending in with the natural environment is one of their top priorities. This could be due to various reasons such as dangerous wildlife, the secrecy surrounding the location, or nearby enemy patrols that need to be avoided. To that end, designers favored stealth and agility over more protective armor that was also bulkier, louder, and more restrictive. As a result, though the gear provides protection against blunt force trauma and basic shrapnel, it is not very reflective against blaster and laser fire. This lighter design also minimizes the gear's electronic profile. There are no noisy servos to power, nor a power supply to alert an enemy's sensors.

The gear itself is adaptable enough to be worn by many species. Several variations also exist depending on the climate of the area. Some examples include thicker materials with thermal capabilities for colder weather and additional waterproofing for areas with thick rainfall. However, the standard uniform consists of an undershirt, jumpsuit, vest, gloves, gaiters, and boots. The long-sleeved undershirt is made of breathable material to remain comfortable and designed to wick away moisture. It provides an extra layer of protection between the skin and sharp plant-life such as thorns and any insects that might be carrying diseases while also keeping the arms covered and warm. The sleeveless jumpsuit utilizes subdued tones and disruptive patterns to help disguise whoever is wearing it, though the actual patterns and colors vary depending on the specific terrain. The Rebellion's lack of resources and supplies made the designers prioritize the areas on the body most often targeted by enemies: the chest, stomach, and legs. The short-sleeved vest is modeled after flak jackets and provides basic, but limited, defense. The gloves provide protection from any harmful plants that might cause rashes or other negative reactions while interacting with them. The gaiters not only keep the ends of the jumpsuit's legs tucked inside, but also provide extra ankle support against uneven terrain and stop dirt, sand, and mud from entering the boots. The boots themselves have deep treads across the bottoms to aid in balance, reinforced toes, and basic waterproof protection. 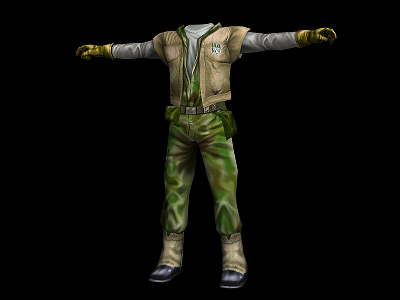