The handled shield is a hand-carried personal protective device commonly deployed by government agencies and paramilitary organizations seeking to enhance both safety and mission capability. Designed to protect the user from blaster fire, shrapnel and thrown projectiles, the handled shield is most effective during urban and close quarters combat scenarios.

Standard handled shield models are rectangular in shape, though the overall width is bigger at the top than the bottom. They are also manufactured in a number of sizes to accommodate the many races in the galaxy. Every shield consists of a durasteel frame capable of absorbing physical impacts and dissipating light blaster fire. Some models include a large, transparisteel view port which grants the user increased visibility to the front without compromising protection.

The protection offered by the handled shield is highly sought after due to its ability to prevent or mitigate potentially life-threatening injures stemming from hostile fire. Typically wielded in combination with a one-handed melee weapon or a small blaster, it has proven highly effective during dynamic entry situations in which a team of armed soldiers or officers will breach and clear a room suspected of harboring dangerous individuals.
« Back To Top 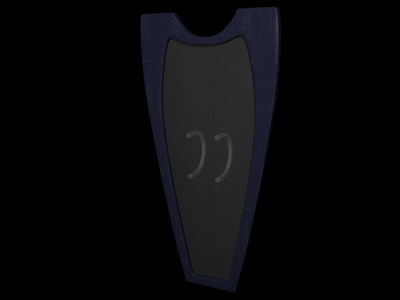