The energy shield has gone through many changes over the past few millennia, the most recent being a hand held version. This variation is based on the advanced energy shielding technology employed by the Gungan race.

The use of a hydrostatic bubble technology allows for the shield to be turned on at a moments notice. Measuring at one and a half meters long, with width of about three feet and an oval shape, the user's entire upper body is protected behind it. Most small arms fire against the shield would merely reflect as it acts as a defensive screen and most physical attacks rebound on contact. A unique feature of the shield is that it is semi-transparent, allowing the user to see through it from behind and in front, thus providing better maneuverability.In addition, most shields of this type allow for solid objects to pass through them, making it possible for the user to fire a blaster while remaining protected by the shield.

The energy shield in current history has been seen in many parts of the galaxy, mainly employed government forces and private military, and used to quell riots or protect VIP personnel. In addition, some criminal organizations have been using them to prevent slave uprisings by protecting themselves against tools and using the feature to see through it to show they are armed and extremely dangerous. 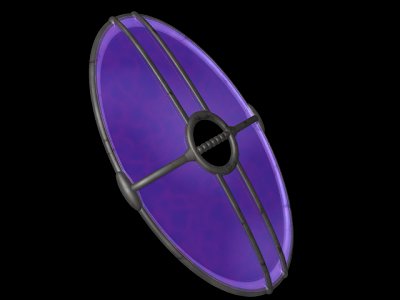