The Veltraa-Class Cruiser is modelled after an ancient capital ship from the Jedi Civil War era, the legendary Interdictor-Class Cruiser. The original cruiser was manufactured by Republic Sienar Systems and then reproduced on the StarForge in large numbers by the Sith. The remodelled version is named after a notable admiral, who first proposed the name 'Interdictor' during the Mandalorian conflict prior to the civil war.

Operating anonymously and with dubious patent rights, a shady manufacturer launched the Veltraa in limited numbers. Though many had a legitimate interest in the vessel, a growing class of mercenaries, smugglers, and other hustlers also observed it with growing interest.

Engineers replicated most of the Interdictor's formidable hull and shields, stronger than those of many other contemporary capital ships. They even added a hangar bay and tractor beams to widen the Veltraa's appeal. Initial cost projections suggested almost no one would be able to afford the ship, so the shipwright insisted on slashing costs to make the Veltraa more marketable. To achieve this, the gravity well projectors were removed, along with adding weaker sensors and a less efficient hyper drive. While these lower costs made the ship more affordable, it was still only affluent sentients who had the financial means to buy one.

The most noteworthy innovation of the Veltraa are the repulsorlifts, which give the vessel the advantage of atmospheric capabilities, a rarity for a ship of its size. The combination of being able to land and vigorous firepower make it a powerful capital ship. These various adaptations makes the Vetraa popular as a defensive warship for entrepreneurs and even small governments and organizations. 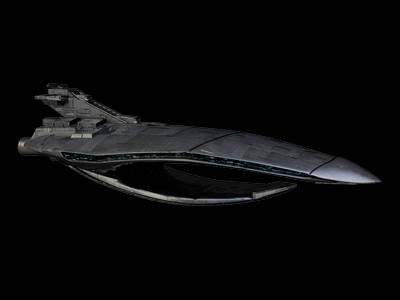