While many corvettes, frigates, and capital ships have been retrofitted by researchers throughout history, the Prometheus-class star craft was the galaxy's first ship designed exclusively as a research vessel. It was designed by a team of scientists and engineers in the Balmorra sector during the Clone Wars who grew frustrated at having to relocate their research, slowing their progress, as the fighting approached their laboratories or space stations. Instead of working with any specific shipyard or corporation, development of the Prometheus was privately funded and its final schematics were made public for any researcher to customize and commission their own version of the ship - provided it was not mass-produced for sale.

The Prometheus is a fully-customizable, modular platform designed to accommodate research in almost every scientific field. While individual owners can install whatever specialized equipment, laboratories, or cargo space they need, each model comes standard with the crew quarters and advanced life support systems needed to sustain crews for longer voyages. The hallmark of the Prometheus-class is its specially-designed power reactor, which is relatively large in comparison to the ship's size. The reactor allows the Prometheus to meet the energy needs of multiple large laboratories operating at once for prolonged amounts of time while not sacrificing the performance of the propulsion, defensive, or life-support systems.

While its sensor array, maximum propulsion, and weaponry put the Prometheus on par with most similarly sized capital ships, its less-than-impressive defensive capabilities and high production cost have made the vessel less attractive as a warship. Most of the model's success has come from private scientists who prefer to keep their research out of the public eye, or at least beyond the regulatory control of sector governments. 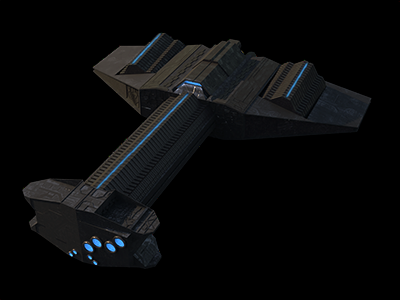