Designed and produced by Rendili Hyperworks for the Galactic Republic, the Valor-class Cruiser served with distinction during the Great Galactic War over 3,600 years ago. At the time, the Valor-class was the biggest and most heavily armed vessel in the Republic Navy, often deploying in a flagship role at the center of cruiser formations and typically escorted by the legendary Hammerhead. Intentionally engineered to challenge the Sith dreadnoughts of the period, its exploits are still celebrated by military historians today.

Every starship design is a balancing act, and Rendili engineers intentionally left nonessential compartments very lightly protected in order to create space for enhanced gunnery and fire-control systems. Their conservative application of armor plating and deflector arrays had the unintended effect of making the Valor-class significantly lighter than the frigates that escorted it, and consequently faster as well. But the level of firepower the cruiser brought to bear against the Sith formations that it opposed, earned the Valor-class a great deal of respect.

A bank of seven thrusters protrudes from the Valor's keel, below the elliptical hull, with the bridge located in a dorsal tower above the quarterdeck. Batteries of turbolasers and ion cannons bristle from the port and starboard sides, from the quarterdeck down to the fo'c'sle, with starfighter launch bays located amidships in what was known as "the valley". A typical ship-of-the-line, the Valor-class was tailored for dueling against enemy capital ships and depended upon its escorts and a complement of docked snub fighters for defense against smaller craft. If the battle went poorly, the Valor could use its tractor beams to sweep damaged squadron mates into the carrier deck before making the jump into hyperspace and escaping.

Technology has advanced significantly since that classical age and the Valor-class, just like its contemporaries, is no longer the apex predator of the stars that it once was. Innovations in sensor and power technology, shield recycling and weapons modulation, have rendered most of the Valor-class systems archaic and obsolete. But with such a storied past, the cruisers that remain operational are prized by those fortunate enough to obtain them. 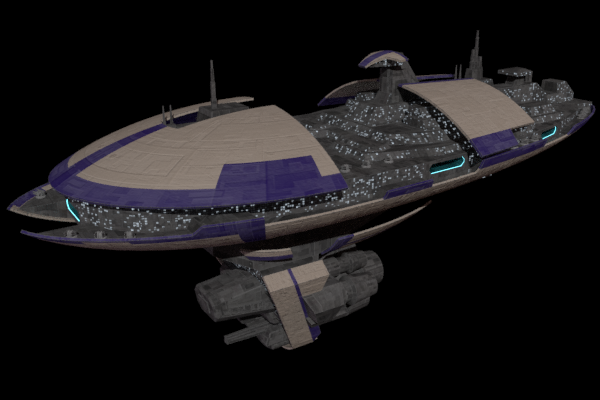