The Venator-class Star Destroyer, currently produced by various yards across the galaxy, is a modified version of the Kuati attack cruiser that fought in the Clone Wars for the Republic. Boasting the same winged, wedge-shaped hull and dual control bridges as its predecessor, this new Venator has been redesigned as a ship of the line. Although the modern Venator still boasts impressive hangar and docking bay facilities, much greater space has been devoted to the provision of capital weapon batteries, at the expense of internal storage capacity. To save on costs, the designers also removed the previous design’s seldom-used repulsorlift engines, reasoning that the ship’s operators would have enough specialist landing craft to obviate the need for the Venator to enter a planet’s atmosphere.

The Venator’s weapon suite is impressive and will allow the ship to go toe-to-toe with most capital warships. The ship’s turbolasers are concentrated in turrets flanking the raised bridge structure, allowing for maximum firepower in the forward arc and efficient engagement of targets to the port and starboard. The heavy ion batteries are concentrated around the ship's bow, as are the torpedo launchers. This gives the Venator maximum throw weight when engaging foes head-on. A noted weakness of the ship is the lack of any anti-starfighter weaponry, which makes the ship reliant on its significant carrier wing for defence against snubfighter attack.

Like its namesake predecessor, the Venator boasts a massive dorsal docking bay, protected by armoured doors. These doors, which resemble an elevated ridge running the length of the dorsal arrowhead section of the hull, can open swiftly to facilitate the rapid scramble of the ship’s carrier wing. This large bay, together with smaller docking bays located in the “neck” between the forward and aft hull sections, ensure that the entire complement of starfighters can be launched in under three minutes. The operations of the carrier wing are coordinated from the port control bridge, while the ship’s operations and fire control are conducted from the starboard bridge. 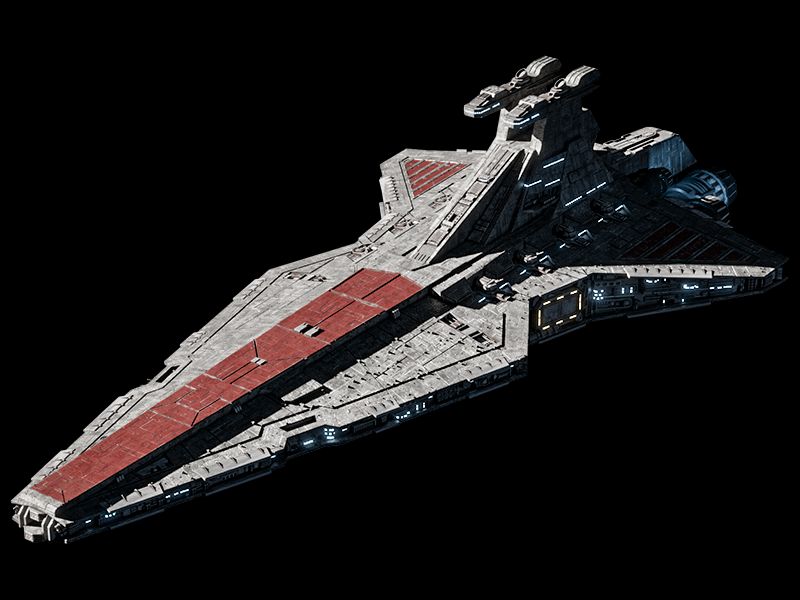