The Ithorian Herd Ships, originally built by Ithorian SkyYards, were based on the traditional Ithorian herd-cities, albeit with the addition of space faring capabilities and advanced weaponry and shielding. These herd-cities, as their name suggests, are the great city centres of Ithor. The Ithorians have an almost spiritual reverence for nature which led to their utilization of repulsorlift technology to keep the herd-cities suspended over the surface of Ithor, thereby protecting their planet's ecosystem. Setting foot on the surface of the planet is forbidden to all except a handful of Ithorians, which is why herd-cities often contain a jungle habitat grown from the plants on Ithor with the intent of making the ships feel like a home away from home.

The Herd Ship is disk-shaped and tapers toward the bottom, with the housing area located in the centre of the ship. Since the Ithorians are primarily pacifist, each Herd Ship is only equipped with minor defensive weaponry, though the impressive hull and shielding provide it with enough protection to make an easy escape during an attack. Since Ithorians are very patient, they are usually content just looking after their plants so the long durations of hyperspace travel do not bother them. As such, the Herd Ship is equipped with a relatively small hyperdrive unit resulting in it being one of the slowest capital starships.

The ships were designed to accommodate entire ecosystems and thus there is very little storage space on board for ships of their size; most of the space not used for essential systems and living quarters is dedicated to jungles, gardens and other planet life, and in some instances even pens for certain domesticated animals. Most of the gardens are located in several domes around the central living area, while the main jungle ecology is based around the outskirts of the ship. In the centre of each herd ship and protected by transparisteel is The Dome of the Mother Jungle. Transplanted within The Dome of the Mother Jungle is a piece of the sacred Ithorian jungle which is supervised by the highest ranking Ithorians on the ship.

The arrival of an Ithorian Herd Ship has traditionally been heralded as a most welcome occasion and precedes an exciting exchange of knowledge and exotic wares. However, Herd Ship construction has ceased and they are now quite rare to see, making their appearance in a system even more delightful to the local inhabitants. 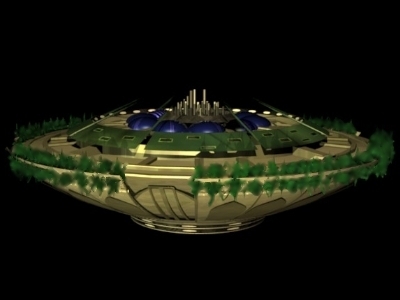