The Pulsar Battle Cruiser is the flagship of the Hapes Consortium and is the culmination of centuries of Hapan research and development funneled into one all-encompassing design and purpose. Intended to be a concentrated heavy weapons platform, its 170 weapon emplacements, not including the 15 tractor beams, can cut through nearly all other capital ships before the Pulsar's shields even weaken to expose its heavily armored hull. The turbolasers are strategically spaced neatly down both its lateral wings so that a single well-placed explosion from a proton torpedo or space bomb would not be able to take out more than one emplacement at a time. Their position along the lateral wings also makes the bow of the ship the focus of the Pulsar's firepower, and Hapan weapon officers usually synchronize the first salvo of turbolaser fire by spacing out the shots across a full second to give it the appearance of two intimidating wing-like sheets of menacing green energy reaching out to smother its opposition. (This firing technique is a tribute to Hapes's phoenix bird emblem). Rotary defensive heavy lasers and ion batteries line the topside and underbelly of the Pulsar's long neck, protecting the ship against fighters and missiles from all angles and extending its capability to disable ships. A healthy complement of proton-torpedo launchers and tractor beams top-off the Pulsar's imposing arsenal of weapons.

With versatility and long operational reach in mind, the Pulsar Battle Cruiser is equipped with large bays and a powerful hyperdrive system. Its launch bays typically hold a swarming mass of Miy'Til space superiority fighters and strategic Hetrinar Assault Bombers, which can be sent out to engage the opposition from a distance or form a tight defensive screen around the ship. In addition, the Olanji Coporation developed Frond-class hyperdrive system gives the Pulsar a hyperdrive rating of 2, making it an atypically fast capital ship despite its high offensive and defensive ratings that would normally cripple a ship's speed. This feature allows the Pulsar Battle Cruiser to deploy anywhere across the Hapes Cluster that it defends in a matter of short hours, making it able to arrive in time to exert its tremendous military influence in any star system.

Despite its aggressive exterior, the interior of the ship is luxurious. All aspects of the ship are modeled after the traditional sleek and eye-pleasing designs of Hapan architecture, maximizing the balance between utility and aesthetics. It is replete with artwork (holo-paintings, sculptures, and small monuments), beautiful displays of plant-life, and almost all the amenities that could be found on a typical Hapan planet city. There is enough comfort on the ship that most crew members are quite content in spending the rest of their lives serving aboard this well-equipped vessel.

Launched 28 years after the end of the Hapan Civil War, this ship also functions as a symbol to the Hapan people as much as it is a system-dominating war vessel. The production of the Pulsar Battle Cruiser rallied the Hapan people behind a powerful visible icon and sealed away the remaining sentiments of betrayal and anger that lingered after the Civil War. Most of the artwork on the ship was chosen to remind the crew of their difficult history, but is displayed in a way to promote national pride and to encourage them to look eagerly toward a promising future. This ship now represents the indomitable united willpower of the Hapan nation, and boosts morale in any system that it cruises through. 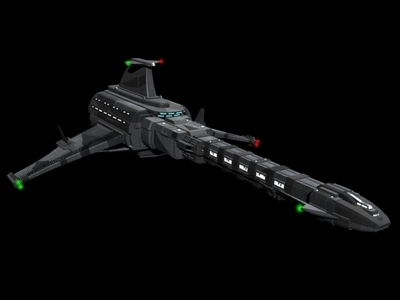