Even though the Force Robe often does not differ in appearance from any other robe, it holds a significant meaning to many sentients across the galaxy and has a history almost as rich as that of the Force-sensitive beings wearing them. A Force robe is a loose-fitting garment existing in a plethora of colours and shapes. It usually covers the entire body and arms and many models feature a large hood that can conceal the face of the wearer. Unlike the more common versions of these clothes, most Force robes possess several pockets, both on the inside and the outside, that allow their wearers to hide small objects, like lightsabers. Force-users favour them because their light weight allows maximum flexibility and freedom to move in combat. While common armours often impede an individual's ability to use the Force, some robes are rumoured to even strengthen this connection, having been imbued with the Force itself. As a result, the garments of ancient and legendary Force-users were often considered sacred artifacts and believed to grant the wearer unique powers, spawning many myths and inspiring some to scour the galaxy looking for them.

Throughout history, many groups adapted these robes as a sort of uniform or ceremonial dress, most famously the Jedi Order and the Order of the Sith. As long as anyone can remember, the Jedi have worn brown or white clothing to publicly display their affiliation and for use in combat. During the first great schism, the first Dark Jedi broke away from the Jedi Order but held on to the tradition of wearing robes. The colour black has been associated with their attire ever since, not only to blend in with the dark, but to inspire fear in all beings unfortunate enough to cross their paths. To this end, they often incorporated large hoods into their designs, regularly using these to conceal their faces, whereas the Jedi opted for a more open appearance and wished to inspire trust and friendliness by keeping their hoods down. During and after the assassination of many Jedi across the galaxy, orchestrated by Emperor Drayson, many Jedi used their robes to masquerade as beggars and travellers to attract less attention.

As civilizations evolved and the wearing of robes fell out of practice, they became even more strongly associated with Force-users. More and more Force-sensitives began wearing them as a way of setting themselves apart from the others, although many of these robes eventually made their way into civilian hands. 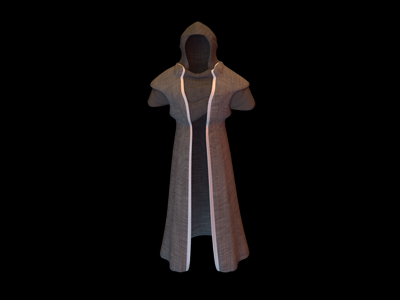