The Rebel Pilot Flight Suit is one of the standard-issue pieces that equipped the pilots of the Rebellion and the New Republic. Its design is based largely on the Old Republic Flight Suit of an earlier era as it was reverse-engineered by the Rebellion when the Republic transitioned into the Galactic Empire. It is created to conform to the body of a humanoid, although specially-modified examples for other species can be found at times. When equipped with a proper flight mask, the suit-mask combination protects the pilot from vacuum. The composite fabric also offers limited protection against fire, electric shock, and the coldness of space. The suit contains special equipment that controls blood flow, which is important for humanoids in high gravitational force equivalent situations. The instrument panel on the chest allows the pilot to regulate heat and oxygen while the suit is plugged into the craft. When unplugged or should the craft's life support system fail, the panel becomes the controls for the small emergency oxygen canister attached to it. Several pockets on the arms, thighs, and shins can be found, though their limited size means that only small items such as ration bars and code cylinders can utilize them. The greatest advantage of the Rebel Pilot Flight Suit over its Old Republic predecessor is that it weighs considerably less, thus affording the pilot greater freedom of movement which is critical when it becomes necessary to quickly escape the confines of a fiery cockpit. 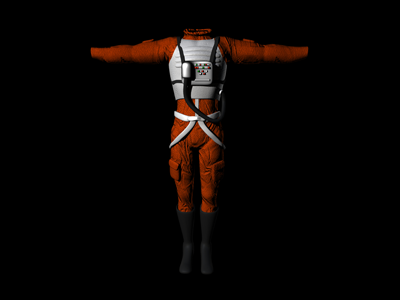