There occasionally appears in the galaxy a ship so outlandish in appearance that it inspires legitimate questions about its designer's sanity. There is no finer example of this than the Fairwind-class Gunship. The brainchild of an eccentric shipwright long forgotten by history, the Fairwind looks less like a space faring vessel and more like a seagoing pirate ship from antiquity.

Though it has a memorable design, sightings of the Fairwind-class have been surprisingly rare. It was first observed during the New Sith Wars, when it was brought into service by the Jedi. The ship's already impressive features, along with the element of surprise its unique appearance often afforded. This allowed the ship to figure prominently in several victorious Jedi campaigns before fading into obscurity for many years.

As one might expect, the Fairwind's unusual construction and design is oriented toward conveying the visual image of a luxury seafaring vessel. Its hull is wooden, though the keel and much of the upper deck are layered in gold. The only external evidence that the Fairwind is a vessel built for flight can be found in the aft section, in the form of two mounted pairs of wings and the casings for the ship's four engines. The horned equine creature mounted on the bow, the twin masts, and the ship's sails are purely decorative, but their uniqueness makes them among the most recognizable features of the ship. The portholes are likewise a defining visual feature, but do serve a practical purpose in that they can open in atmospheric flight to allow fresh air to permeate the Fairwind's interior, which, like the exterior, reflects the seafaring motif. Its cockpit resembles a state of the art marine captain's quarters. The pilot controls, which are understandably located in the cockpit rather than in the exterior main deck, resemble the steering wheels of ancient aquatic vessels, but are perfectly suited to maneuvering at sublight speeds during space and atmospheric flight.

Although the Fairwind sports a wooden hull, the wroshyr wood used is capable of absorbing a deceptively high amount of punishment, including the extreme heat of atmospheric re-entry. The ship's heavy armaments also afford it considerable firepower for its size. These features, in conjunction with the ability to carry a large amount of personnel, make it a formidable opponent when used in battle. 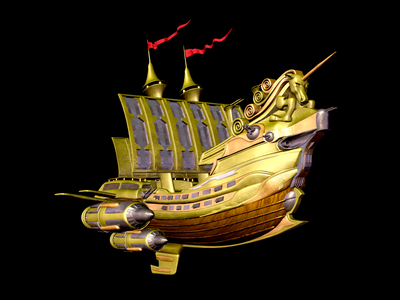 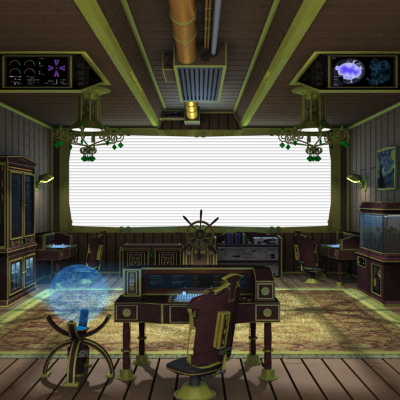