Developed by the the Daupherm Planet States, an alliance of Core Worlds that existed prior to the First Galactic Civil War, the Discril-class attack cruiser was manufactured to serve as Daupherm's primary capital vessel. Outside of the Daupherm Planet States, however, the cruiser remained relatively unheard of due to the cruiser rarely being used outside of the alliance's territories. The primary use of the Discril-class, affectionately referred to locally as a Discruiser, was to expand the alliance's borders in the form of invading nearby worlds.

The shape and design of the cruiser is one of a kind, and reminiscent of other old Core World starships. The Discril-class attack cruiser's most notable characteristic is the placement of the bridge on the bottom side of the vessel, extruding outward from the starship's lower hull, and grants the crew a two hundred and seventy degree view of its surroundings. This design choice was made as the Daupherm engineers desired the captain to maintain awareness of their cruiser even if the vessel's sensors failed.

The Discril's structural design was influenced by the YT-series of light freighters, as the designers partially adopted the successful saucer shape for the cruiser's rear half, including for its engine configuration. This reduced the initial cost of production for the design, but also decreased its carrying capacity and hull strength by allowing the engine system to occupy most of the ship's rear half. Adding onto this, the cruiser's internal capacity is further reduced due to the space dedicated for its weaponry, advanced sensor systems, and both docking and hangar bays.

While the Discril-class was officially named an attack cruiser, it was actually rather small and lightly-armed and technically fell into the corvette classification under the widely-used Anaxes War College System. Most of the Discril-class cruisers were decommissioned and recycled when the Daupherm Planet States was annexed, although some have recently resurfaced on public markets. Due to its unique design and capabilities, many of the models that come up for sale are grabbed by avid ship collectors, though quite a few have been seen being operated by mercenaries, pirates, and even small governments. Despite its flaws and dated design, the Discruiser is still considered to be a capable corvette for low-tech engagements. 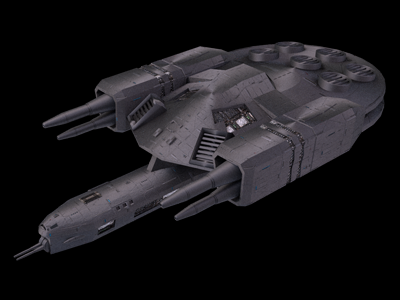