At first glance, the Sphyrna-class Corvette appears to be a scaled-down version of the Hammerhead-class Cruiser. This was exactly what the engineers at Corellian Engineering Corporation intended when designing the Sphyrna. They figured that customers would be more inclined to buy a corvette that resembled the rugged and faithful Hammerhead.

Despite this resemblance, the Sphyrna is a totally different ship. It was designed near the end of the first Galactic Civil War as an alternative to the CR-90 Corvette. The Sphyrna’s three sublight engines propel the craft at speeds just under those of the eleven-engined CR-90, while it’s hyperdrive allows it to zip through the stars at double the speed of the latter. Its distinctive oversized bridge was designed with strength in mind, as the bottom half of the structure supports the ship's weight when landed. It has been reported that the ship can survive a direct collision with an Imperial-class Star Destroyer with only minimal damage to the bridge, though these reports may have been exaggerated. The top half of the bridge stores the ship's sensor array, which, while not nearly as powerful as the CR-90, has a decent range for a ship its size. Unlike the larger Hammerhead-class, the Sphyrna features racks for cargo containers mounted on the underside immediately behind the bridge. This allows the vessel to carry larger and heavier loads than the CR-90 while leaving more room in the hull for passengers.

Although having several clear advantages over the CR-90, the Sphyrna-class Corvette cost almost three times as much to produce. Only a limited number of Sphyrna-class Corvettes were built before Corellian Engineering Corporation was nationalized by the Galactic Empire. Pressured to produce more modern warships for the Imperial Navy, Corellian Engineering Corporation abandoned the Sphyrna and a planned militarized version in favor of continued production of the cheaper and proven CR-90 and CR-90 Assassin-class Corvettes, respectively. Nevertheless, the “Hammerhead Corvette” has proven to be just as rugged and faithful in the hands of mercenaries and smaller governments as its older and larger cousin, with several small-scale production lines illegally turning out new vessels for pirates. 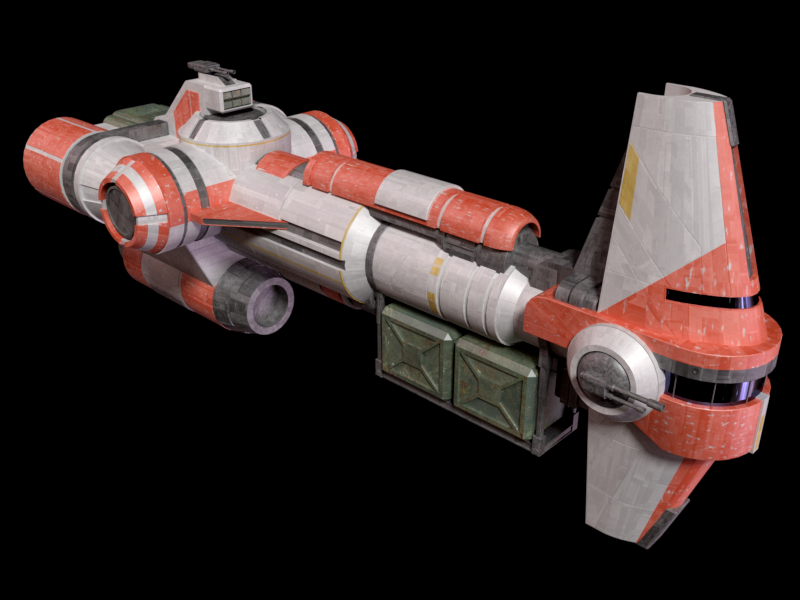