One such cybernetic available on the Galactic market now is a weapons unit, commonly seen in military R&D scientists but sometimes sported by pirates or bounty hunters looking to improve their own gear. A cyborg weapons unit's components and functions can vary depending on their manufacturer. Most often, though, they follow a standard array of features. Neural interfaces are deployed under the skull or nearest equivalent to enhance and accelerate the development of neural pathways allowing the cyborg to memorize complicated schematics or manufacturing techniques, and increasing their ability to recall information faster. These units often relied on external computing software and memory banks to increase both memory capacity and mental calculations and measurements. Microprojectors implanted into the retinas of the cyborg allow for augmented reality displays of material datasheets, measurements, and blueprints. Finally, some systems feature field diagnostic kits that are activated by touch to any weapon platform, allowing for the user to identify and repair issues with the weapon on the fly.

While the side effects of these cybernetics are lessened compared to their predecessors, there are still some present. In the example of a common weapons unit, the neural implants have been known to cause muscle spasms and loss of fine motor control in the cyborg's extremities. Additionally, the retinal displays are known to cause ocular nerve damage, rendering the user extremely nearsighted. These drawbacks often translate to a decrease in combat capabilities for its users, rendering them physically weaker and making it much harder to aim a blaster. 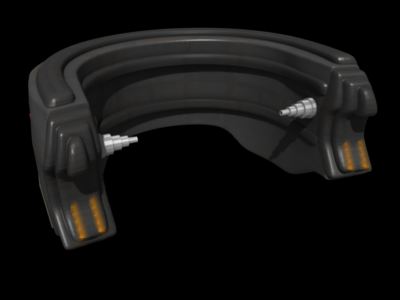