The 2X-3KPR was an early attempt by Lerrimore Droids at producing a cheap, but capable droid for monitoring the security of storage and other facilities far from the eyes of the public, where function is more important than form. Indeed, this security droid resembles nothing more than a random collection of circuits and wires that a pre-teen child has put together in a science lab in order to get a lightbulb to light up, all mounted on a small tracked chassis.

Despite its lack of anything resembling aesthetic appeal, the designers did succeed in creating a droid that adequately fulfilled its security function. The tracked chassis can be very quiet, especially at low speeds and with padded tracks. The surveillance equipment mounted under the droid's dome includes a high-resolution holorecorder and a directional microphone able to detect whispers up to 50 meters away. While the droid lacks the sophisticated droid brain that would allow fully autonomous operations, it can store up to thirty separate commands and execute the ones most appropriate to its situation. It also has a data link that enables it to activate security alarms, perimeter lights, and other security equipment as needed.

The lack of need to make the droid appear appealing to the eye as well as the use of many commercially available components enabled the manufacturer to keep costs low, and has spawned a host of copies, some of quite varying quality. As such, the little droid is still in common use throughout the galaxy and is unlikely to be completely phased out anytime soon. 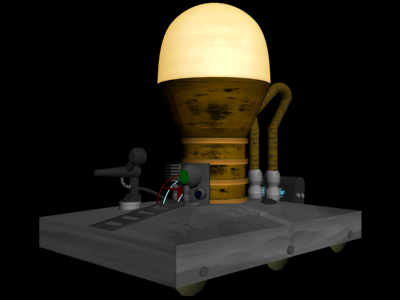