Independently designed, the G-400 was marketed as an affordable alternative to existing starfighters during the First Galactic Civil War. In addition to the low price, its efficient sublight drive and upgraded sensor package helped to boost galactic sales.

Utilizing the enhanced sensors, the G-400 is capable of detecting entities from about two klicks away. This feature, complimented by the starfighter's speed and hyper capability, has often meant that battles involving the G-400 are geared towards surprise strikes, as its otherwise unimpressive armaments quickly fold under organized resistance. The other notable feature of the G-400 are the swirling patterns painted over both engines, which were reportedly added in an effort to cause disorientation in enemy pilots during close quarter combat.

While once prevalent with small armies and mercenary groups, the G-400 has diminished in popularity across the galaxy primarily due to technological advancements in newer models becoming more affordable. For this reason, the G-400 is utilized mainly by those who are reliant on ambush tactics and rapid counter attacks, but financially unable to retire these dated starfighters. 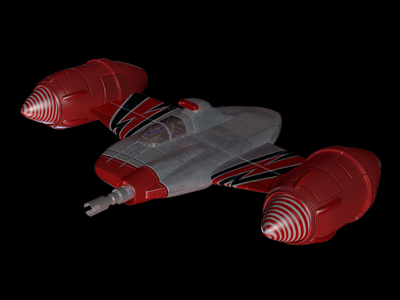