The S-250 Chela-class starfigter was designed and built by the Corellian Engineering Corporation soon after the Great Sith War. The aim of the designers was to win the Republic Navy's "Generation Tomorrow Starfighter" competition, although their design eventually lost out to the quicker and cheaper Aurek Tactical Starfighter. Nevertheless, it was still purchased in small numbers as one of the more impressive losers in the competition.

Though lacking in speed, the S-250 has a denser hull than Aurek, which provides a higher survival-factor for pilots. For this reason, leaders of Aurek squadrons often piloted an S-250. Also, much like the Aurek, the S-250 was given a hyperdrive, a revolutionary idea at the time of its inception. While the hyperdrive allowed the starfighter to function independently, it was still most commonly used in conjunction with a carrier, to allow the fighter a safe place to dock between missions.

Unlike the Aurek, the S-250's body is much higher than it is long. The result of which is a commanding view for the pilot in the cockpit. Furthermore, like many of its contemporaries, it was equipped with a pair of heavy laser canons as the primary weapon. What sets this ship apart however, is the inclusion of a pair of concussion missile launchers. This allowed the fighter to provide a threat to heavily shielded targets, where the Aurek could not.

Recently a number of S-250 fighters have been seen circulating the galactic market. Various traders have stated that the influx of these ancient and rare fighters come from the personal stock of a now deceased Mid Rim starfighter collector. According to other reports, various starfighters have been liquidated by his estate, not only limited to the dozens of S-250s that have appeared.

A few of these fighters have been acquired by various companies for research and development projects, with many companies stating that the general structural design of these fighters was the base for the modern B-Wing fighter of the New Republic and the Firespray-class interceptor of Kuat Drive Yards. As such, the current race for new technology has ship manufacturers rallying for inspiration. The S-250 gives an upper-hand to any corporation looking to secure a foothold in the modern heavy starfighter markets. 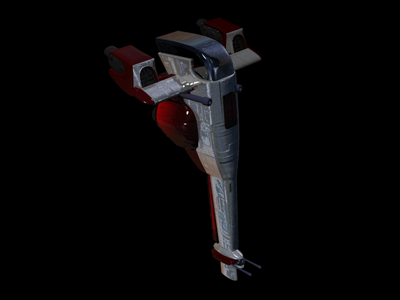