Introduced in the final years of the Galactic Republic, the V-19 Torrent starfighter served as a short range assault fighter. When the Republic discovered a need for a starfighter capable of escort missions, the V-19 was rapidly converted to fit into the role. From that point on, all newly constructed V-19 starfighters include a hyperdrive, while some of those already in service were either retrofitted with one or modified for use with a hyperspace ring. It is unknown if any of the early V-19 starfighters without a hyperdrive survived the Clone Wars.

The V-19 Torrent is also considered to have helped pioneer the S-foil design concept, which gave it unparalleled maneuverability compared to other contemporary fighters, and has been adopted by many starfighters since the Clone Wars. Some of the more noteworthy examples include the Eta-2 interceptor and iconic T-65 X-wing. The repulsorlift engines included in the V-19 design also granted it the ability of vertical takeoff, increasing the starfighters versatility.

Another notable aspect of the Torrent was its missile launchers, capable of acquiring targets completely independent of the pilot. Its weapon systems were groundbreaking when the starfighter was originally introduced, making the V-19 an important and iconic part of the Grand Army of the Republic.

The V-19 Torrents were replaced by the ARC-170 and V-wing starfighters, but surviving units were still utilized by the new Galactic Empire in older patrols to secure the Outer Rim after the Clone Wars. The Galactic Republic's mass production of the V-19 has resulted in a large number of operable ships and replacement parts throughout the galaxy, increasing the ease of maintenance for this particular starfighter. This factor, along with its integrated hyperdrive, armament, and durability, has allowed the V-19 Torrent to remain an able and popular starfighter despite the age of its design. 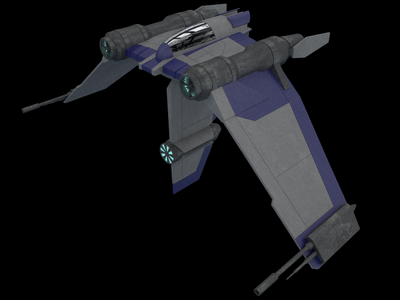