Descended from the Z-95 Headhunter, the X-Wing is the New Republic's main all-purpose starfighter. The X-Wing has four engines at the back of the fuselage, each mounted with an aerodynamic S-foil. The S-foils on each side could be locked together for increased speed or folded to increase the lasers' field of fire and improve the ship's maneuverability. When folded out, the S-foils take up an 'X' shape, hence the name of the fighter. When the S-foils are locked together, three landing gears can be extended from the belly of the ship, allowing it to land.

The X-Wing's cockpit is located in the middle of the ship's fuselage and has a small cargo compartment behind the pilot's chair where survival and repair gear are usually stored. An astromech socket is located behind the cockpit allowing an astromech droid to provide navigational data to the hyperdrives, and to act as a technician during the flight. The fighter is equipped with enough fuel, oxygen and power to last for a week of non-combat operations, but additional tanks can be attached to the S-foils at the cost of lowered performance. The X-Wing's power is generated using a centrifugal vapor fusion and ionization reactor, located just behind the astromech socket. Both the pilot's chair and the astromech can be ejected and thrown clear of the fighter in case of emergency.

The X-Wing's main armaments are four laser cannons, one on the tip of each S-foil. For longer range targeting, two proton torpedo launchers are located on each side of the fuselage. The fighter contains a deflector shield generator, located near the rear of the craft. Shield projectors in the ship's wings help to distribute the shield energy evenly around the entire hull. The X-Wing is equipped with a Bertriak active jammer system. While these jammers are not powerful enough to interfere with capital-scale sensors, they can interfere with guided missile systems and completely jam small fighters with weaker sensors. The X-Wing's main sensors are located in its nose cone, while a secondary sensor is located in the aft of the craft to give the pilot a view of the ship's rear arc. However, there is a blind spot at the rear of the fighter's belly which is one of the X-Wing's greatest weaknesses. 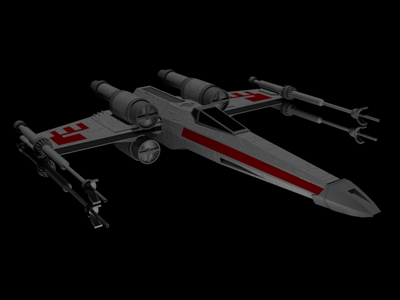