The B-wing is the largest and most heavily armed fighter-bombers of the New Republic fleet. One of the main goals when designing the B-wing was to replace the aging Y-wing with a more maneuverable and efficient heavy fighter, one more suited to cope with the advanced technologies of the Galactic Empire.

The design of the B-wing involved the creation of a long wing, with the cockpit and main cannon located at opposite ends. Two interlocking s-foils, when unfolded, result in a cross-like shape located near the center of the main wing and has resulted in the ship's nickname, "blade-wing" The cockpit is spherical in shape and capable of rotating in-flight, providing the ship's pilot with multiple tactical options and unique perspectives when in-flight. With four engines and such a unique design, the B-wing can transverse the battlefield with almost unmatched maneuverability, excluding the A-wing.

Equipped with three heavy lasers, one at the bottom of the primary s-foil and the other two beneath the cockpit, this fighter-bomber has the ability to overpower most enemy fighters and defensive positions when employed correctly. Also located on the primary s-foil are the ion cannons, which can deliver massive damage against shields and disable fighters in-flight for capture and potentially pilot interrogation. The ion cannons have also been known to be employed during bombing runs to target and disable the communication arrays on frigates or other capital-class ships, limiting their ability to communicate with ships in other systems. Located alongside the laser cannons beneath the cockpit are twin photon-torpedo launchers, which carry a payload of eight photon-torpedoes. The addition of these launchers transform the B-wing from a simple starfighter to the more formidable fighter-bomber class, allowing for additional damage to be dealt to the target.

Despite the many advanced design features, several problems plague the B-wing. The unusual gyroscopic cockpit produces trouble for inexperienced pilots, as sometimes the cockpits do not rotate along with the ship, causing collisions and, in extreme instances, deaths. At other times, the gyroscopic cockpit has been known to jam causing the pilot to be stuck in an unusual position, making combat more difficult. The B-wings are also notorious for being difficult to repair as all three s-foils fold together, thus making it difficult to access the central core. This has caused problems for the technicians and mechanics working on the starfighter as they have to dismantle large sections of the ship to administer these repairs. 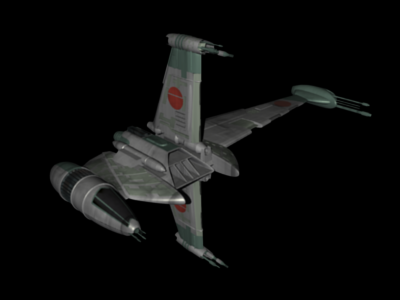