The X-ceptor is another variant of the range of starfighters generally referred to as "uglies". Uglies are often produced by independent shipyards using salvaged wrecks of various starfighters and freighters. The X-ceptor in particular is an amalgamation of an Imperial TIE Interceptor and Incom T-65 X-Wing.

While retaining the fuselage and rear-mounted wing position of the X-Wing, the S-foils which give the Incom fighter its maneuverability are replaced with solar panels salvaged from TIE Interceptors in the X-ceptor incarnation. The solar panels are on the ugly are modified to house heavy lasers, and the X-ceptor also has a limited hyperdrive.

Performance wise, the X-ceptor is not as efficient as the X-Wings or the Interceptors which donate parts to its construction. As with most uglies, build quality is not guaranteed, since they have been reassembled from recycled bodies and components harvested from wrecks. Considered barely space worthy by most legitimate businesses, they are more commonly used in service by pirate groups, smugglers or other independent defense groups who do not have large resources to fund more advanced starfighters. Though X-ceptors are equipped for combat, they are usually outclassed by modern starfighters. 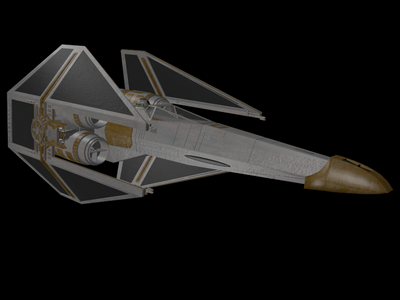