The Tie-Wing is one of the numerous hybrid vehicles commonly known as "Uglies". Although its origin is unknown, many rumours surround its creation, although none have been confirmed. The TIE-Wing is known by a number of different names, including TYE-Wing, T-Wing, Y-ball, TIE-Y, TYE fighter, DIE-Wing or TYE.

The Tie-Wing combines the ball cockpit of the Imperial TIE-fighter with two Y-Wing nacelles. The fighter is armed with two TIE-fighter laser cannons and the sensor package of the TIE family. They also have fair manoeuvrability. However, the TIE-Wing seems to combine the deficits of its counterparts; the TIE-Wing has no shields and has a weaker hull than the normal TIE-fighter (TIE-Ln). Moreover, it is not equipped with a hyperdrive and has the slow sublight speed of the Y-Wing.

Owing to the fact that the TIE-Wing has relatively weak weaponry, no shields and a very weak hull, these ships are commonly known as DIE-Wings due their low survival rate. Even though their sublight speeds are faster than most "Uglies", they cannot keep up with most mass-produced starfighters. Due to the lack of a hyperdrive, TIE-Wings tend to be used to defend planets as they cannot flee from most combat zones.

TIE-wings are often found in the service of pirates, due to its low cost. They are also found in many primary defensive fleets and emergency fleets. 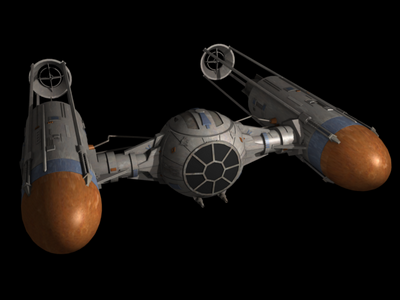