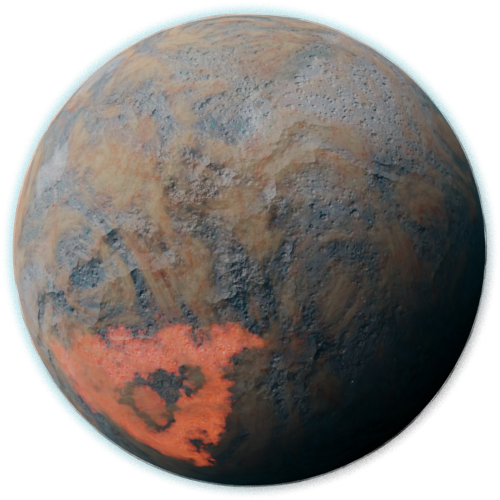 The ordinal first planet of Tar Morden was originally a cold, desolate world with a small droid production operation running on a mostly automated, skeleton crew. The droid foundry was self-sufficient in nature: all of the needed raw materials were obtained by dangerously sundering the icy glacier surface to extract the planet’s rich natural resources, which had nearly wiped out its initial population of corporate colonists. Conditions on the planet continue to be highly dangerous due to the planet’s extremely long and intense nights with subarctic temperatures and violent blizzards that have flattened the entire surface.

The intense weather is a by-product of the atmosphere’s steep concentration of heavy metal particles, making the air extremely toxic to most lifeforms and the planet’s surface devoid of any organic life. However, life does exist on Tar Morden, only deep beneath its frigid surface in its vast subterranean network of caves and caverns that provide barely habitable breathing conditions and warmth. Kryknas have been predominantly spotted in massive, concentrated swarms at the deepest levels, making Tar Morden’s caves a spelunker's worst nightmare to explore.

Fortunately, after years of development, Tar Morden has flourished from its minimal industrial configuration and transformed into a full-fledged industrial complex spanning the entire planet, seamlessly combining residential, commercial, and industrial districts into a highly productive environment. Nearly all infrastructure is underground, leaving most off-worlders longing for the sun yet its residents feeling reassuring refuge from the lethal frost outside. While the Krykna infestation has largely been kept at bay and Tar Morden has maintained and vastly upscaled from its industrious roots as a humble droid foundry’s home, the darkest caves have yet to be fully explored, and there has been an oddly persistent local legend of a monstrously sized Krykna brood mother lurking in its depths.