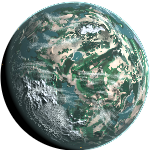 Kathol is the planet after which the entire Kathol sector is named. It is inhabited by a variety of races that generally coexist peacefully. The planet's climate is moderate and, as a result, quite a diverse range of flora and fauna populate the undeveloped areas.

Vast, uninhabited wastelands of frozen tundra lie at the northern and southern poles of the planet. Around Kathol's equator, a wide variety of terrain can be found. In one central province, volcanic mountain ranges spew forth deadly gushes of molten magma into the sky. To the east, a seemingly endless desert sprawls for miles; sand dunes sweltering under the sun's radiance as far as the eye can see. South of the fiery mountains lie luscious, rolling grasslands inhabited by farmers and other natives. There are yet other areas covered by dense deciduous-forests and humid, fetid swamplands. These wild places are the homes of most of the plant and animal life native to Kathol, including a number of especially unique ornithological species.

Most noteworthy, however, are the great cities of Kathol. Equipped with all the modern necessities such as spaceports, hospitals, shops, and residential blocks, these megalopolises are to be found in the most populated areas of fertile land along the equator. Many of the cities are presided over by great palaces built in honor of the planet's lords and rulers of present and past. The lofty battlements of these architectural wonders represent a physical manifestation of the military pride of the people of Kathol, and their pristine condition conveys the grandeur of the current political regime to a visitor. Aside from the attraction generated by the palaces, the cities also represent trading hubs with the rest of the sector, drawing in traders, bounty hunters, and emissaries from all over the galaxy.

Kathol has recently seen the arrival of a dark religious order, which now operates a major base of operations there. The ensuing turmoil has led to an increase in planetary and system-wide security measures and a constant state of vigil by the military. Visitors to Kathol should be aware of the strict laws and military justice for which Kathol is known.