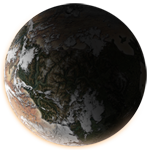 Bak`rofsen's red color comes from iron oxide in the sand on its surface. While much of the planet is covered in deserts, patches of life around oases allowed easy settlement during its initial colonization. The planet's climate is hot and humid near the prime meridian during the summer months and cold on its outer banks during the winter months, due to the planet's unsusual rotation pattern. Bak`rofsen's rich resources allowed its economy to quickly flourish and it remains the most influential planet in the system in spite of growth on the other planets. Bak`rofsen is a major manufacturing and trade-oriented planet and as such boasts a huge network of traders that make the planet a go-to destination for smugglers and thieves.