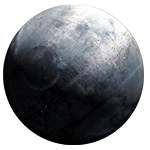 Marharawen is a rogue moon located in the Wyl Sector, near the edges of known space. Describing its precise location is difficult because the moon is not in the orbit of any planet or star. Instead, the space within the moon's gravitational field has been denoted as system X-110. Astronomers have theorized it may one day become part of the nearby Beta Olikark system or may leave the galaxy entirely. The moon was re-discovered by retired Imperial Grand Admiral Gorn Veynom in 2 CGT, alerting a number of political powers who were able to decrypt the Grand Admiral's message seeking assistance from the Galactic Empire. The broadcasts from the moon led to Marharawen becoming the site for conflict between rival Imperial factions and the fledgling Rebel Alliance.

The mysterious moon is believed to have come under the control of the Galactic Empire during the conflict, but was eventually seized years later by the religious sect Alissma, resulting in the death of Moff Qirov Quel-Droma. In 14 CGT it returned to the Galactic Empire's control after what is believed to have been a classified diplomatic negotiation. To this day, not much is known about the moon as both Alissma and the Galactic Empire have prohibited visitors and study by external researchers. The scraps of data made public indicate a high concentration of metallic ore in the moon's crust, which combined with its odd orbit within the galaxy, have some astrophysicists theorising it was artificially moved to its current location by an unknown means.