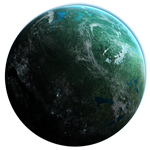 This temperate world is home to millions of beings and is the homeworld of the native Kuati. Lush jungles cover much of the planet, while a vast ocean has created numerous trade opportunities. Many cities have sprung up along its shores, making water travel just as important to the industry as surface-to-orbit trade. Forests and marshlands virtually void of predators lie to the south of the ocean, adding to its rich serenity.

Kuat is home to the Kuati Clans who terraformed and settled the planet thousands of years ago. Turning the planet into a prosperous world through artificial means, they then set out to construct enormous shipyards in its orbit.

25 various stations in the planetary orbit have fueled production and security activity on and above the planet. 9 are Golan IIs and 4 are Ataturk-class Stations for protection, while the other 12 are shipyards which have been a key to employment for many. They are controlled by the Empire, which uses them as an extension of their power to monitor civilian and military access to the surface.