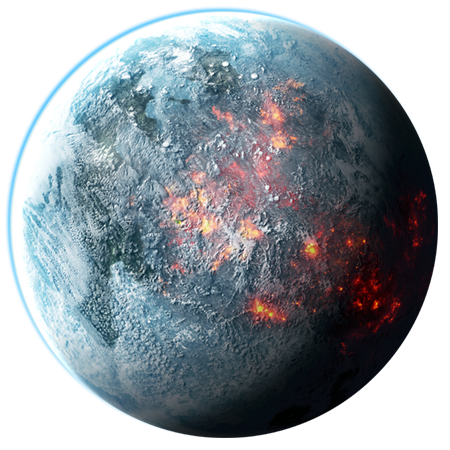 Formac is a varied palette with the majority of the planet being covered by glacial ice and the rest a humongous lava field. The heavily forested, western side of the planet contains diverse flora which are generally involved in at least one symbiotic relationship. In one such arrangement, a common species of tropical plant provides the chemical food for a delicate fungus that grows in a lacey pattern across its broad, moisture-rich leaves. The fungus is incapable of synthesizing its own sustenance but produces deadly toxins that dissuade animals from disturbing either species. The chemical is also a substance used in the manufacture of starship visor ports to prevent them from icing over in the vacuum of space. Unique in the galaxy is Formac's strange climate. The combination of ice and fire is peculiar in that the lava doesn't melt the ice; in fact, it hardly even warms it. It is suspected that the sulfuric gases from the lava have mixed with the ice and created what is essentially an un-melting toxic wasteland. The extremely frigid climate of Formac, while allowing the schizophrenic mix of molten rock and glacier, is also murderous to most sentients. The only permanent structures on this icy hell are a few scattered listening stations and an abandoned pirate hideout. Many attempts have been made to terraform the planet, but the ion engines in the enormous terraformers could not run in the subzero temperatures. The behemoths were eventually left to their fate on the surface as the company that owned them went bankrupt following the engine disaster. After 50 years, these monstrosities make the planet's glacial mountain ranges seem pockmarked. Spacers who were unfortunate enough to land the job of piloting their ships into this freakish hellhole have often described Formac to their employers using the phrase, "when hell ices over."