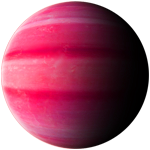 The largest celestial body in the Asher system, Asher I was both a stunningly beautiful natural phenomenon and a clear representation of technological mastery over nature. While the planet dwarfed the other planets within the system, Asher I was not large amongst its contemporaries. The core of the planet was unusually dense, contracting the gas giant tighter than most. This resulted in a more active rotational core, generating far more heat than most gas giants with temperatures exceeding four hundred degrees. This incredible heat was lethal to nearly all sentient life and even posed a threat to low-grade hull plating. It was this heat however that was responsible for producing the unique chemical reactions within the gas giant that produced Asher I’s vivid magenta hues.

Beyond being beautiful, Asher I presented the possibility for a feat of engineering. Cloud cities were designed specifically for the Asher gas giant. State-of-the-art heat pumps and siphons were constructed in partnership with a local manufacturing company for the shielded, bubbled cities. These heat pumps supplied an unlimited amount of energy to the planet's networked power generators. With unlimited energy at the disposal of Asher engineering teams, the planet was rapidly transformed into an economic powerhouse.

In the span of only a few short years, Asher was developed into a planet-wide city. Manufacturing hubs, residential districts, commercial zones - Entire cities were developed and dedicated to every facet of sentient living. Refugees, skilled labourers, and business professionals flocked to the developing gas giant, eager to start a life out of the Core. Being located deep in the Outer Rim Territories, Asher I was often far enough removed from most sentient knowledge, and most old navigation computers, that it offered a fresh, clean start for many of the inhabitants that moved there.