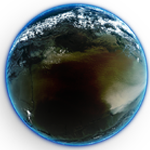 Asher II was a medium sized planet that was the closest orbiting planet to the Asher sun. Located at the center of the ideal ‘Habitable’ zone from the M Class star at the heart of the system, Asher II should be far more temperate and possess an order of magnitude more natural flora and fauna than it does. However as it is, Asher II is mostly desert along the equator of the planet, with the poles containing massive glaciers with ice several kilometers thick. The poles would have provided Asher II with large oceans and an atmosphere rich in humidity had the planet formed a little less differently.

The planetary rotation of Asher II is exceptionally slow for a planet of its size, completing a single rotation on its axis once a fortnight. The desert along the equator of the planet suffers the consequences of such a slow rotation. During the long periods of days, the desert progressively gets hotter the longer it’s exposed to the sun. Then, after the long days comes the nights of freezing cold and near total darkness. Meanwhile, the arctic poles of the planet remain frozen, rarely exposed to the sun due to the angle of the planet along its axis. Core samples taken from deep within Asher II suggest the planet's core is diminutive in size, possessing just enough mass to have formed the planet before cooling to a very slow, nearly inert semi-fluid, providing very little in rotational energy for the planet.

With Asher II’s habitability being low and in its environment in an untenable state of fluctuation, the planet was instead heavily prospected for natural minerals during the expansion and growth of the ecumenopolis city planet project located on the gas giant within the system, Asher I. Massive quantities of natural resources were extracted from the otherwise non-consequential planet, with very little environmental damage on a planet possessing such little natural life. Remarkably, even after the completion of the City Planet project, Asher II’s natural resources remained bountiful and mining operations can still be found on the planet today.