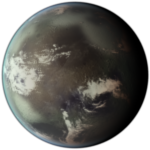 The only naturally habitable planet in the Bootana Hutta system, Imzig finds itself home to almost all of the system's inhabitants and is the home planet of the Imzig race.

One of the most interesting features of the planet is that its poles are set such that it appears to be rotating in a perpendicular fashion when compared to the other planets orbiting the system's sun. This has caused what would normally be considered the eastern-most and western-most points of the planet to be constantly farthest from the sun in its orbit, which results in them being covered in year-round ice and snow while the middle of the planet, from north to south, remains comparatively warm.

Housing the main spaceports has led what little trade the system receives to be done on Imzig. Exports, including raw materials and textiles, and imports, consisting mostly of food products and other consumables, are traded primarily with the neighboring system of Aline. The raw materials for export usually originate on the other planets in the system and are regularly brought to Imzig to be sold; textiles are produced in several of the planet's larger cities.

It is believed that the self-proclaimed King Balt, who controls Imzig's planetary government, has been heavily influenced by the pirates in the area. The Balt family long held influence within the system, but for decades they had been slowly losing hereditary seats in the former government. Local lore suggests that, having trouble maintaining their vast ancestral holdings in Vionix, the family sought outside help on the eve of bankruptcy. What followed was an immediate change of fortune for the Balt clan while that of their competitors took a drastic downturn marked by worker disappearances, shipping delays, and falling prey to the rising piracy. With the Balt family and the local pirates prospering at virtually parallel rates, collusion between the two has long been suspected.

Since taking power, King Balt has maintained a web of spies and informants to keep himself abreast of potential threats to his power base, which includes an appointed council family members and influential merchants. Yet, even as the internally the Balt reign becomes more oppressive, observers suggest that it is these pirates who actually control the system and that the monarchy exists only to serve their will. Validating these suppositions has been nearly impossible, but it is commonly known that pirate activity in the area is very high, suggesting a tacit agreement between the absolutist regime and the pirates, if not more.