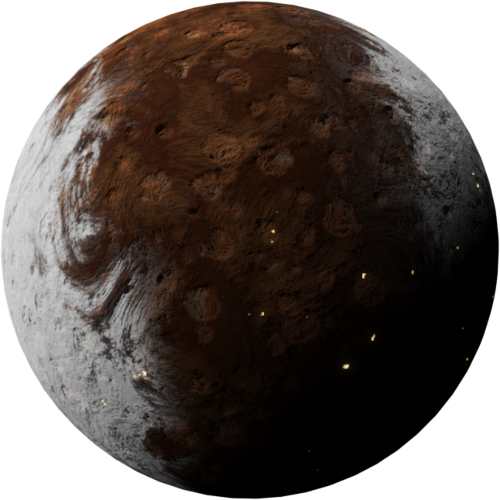 “As womp rats are to farmer boys, we are to the Gods; they kill us for their sport”, the Corellian saying goes. Such is the tale of Tar Morden V, a planet which was once home to a large population of Ishi Tib. This planet, which used to contain many domed settlements throughout the surface, was a vibrant colony, making many rich on successful trade between Tar Morden V and Tibrin.

This planet, a cold planet with no natural atmosphere, is located in the Tar Morden system in the Expansion Regions. The planet rotates on a horizontal axis, resulting in polar caps in the east and the west as opposed to the north and the south. When the Ishi Tib began to settle this planet, they set up domes in the middle, away from the ice. These domes were composed mostly of water, allowing the aquatic Ishi Tib to swim most of the time. This water was taken directly from the ice caps, and for a time, the polar glaciers were much smaller than they are today.

However, this settlement came to a tragic ending a hundred years before the outbreak of the galactic civil war. A meteor storm pummeled the planets, breaching the domes which had not been made to withstand such force. Because the planet lacked an atmosphere, yet still retained high levels of gravity, the asteroids not only did not burn up but came down with such force that they easily penetrated the domes the Ishi Tib had set up. No sooner had the domes been breached than the water froze, instantly killing the Ishi Tib trapped within it.

All the corpses were slowly recovered, and much of the material used for the domes was recycled for use on Tibrin. However, one can still see the wreckage of the former Ishi Tib colony that once existed here, buried underneath thousands of craters, a testament to the cruelty of fate.