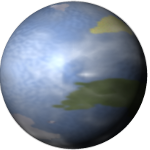 Menias is the hottest planet in the Metellos system due to the short distance from the star it orbits. Its atmosphere contains deadly toxins, which prevent most species from visiting or inhabiting the planet. It is unknown how much of the planet is populated at all, as it can be difficult for sensors to scan through the atmosphere, especially underground, which is believed to be the best location for survival on Menias. The planet is composed entirely of dense rock and caves. There is evidence of volcanic activity below the surface, which can be seen by the lava which has broken out from the ground near the planetary equator, making even the caves a dangerous place to live.