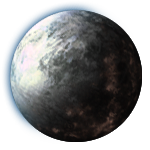 Planet Revyia III is located in the Revyia system of the Veragi sector in the Outer Rim Territories. Revyia III hosts one of the largest populations in the system, home to the Black Sun Syndicate.

The planet is used as a centralized supply depot for Black Sun agents operating in foreign territories, thus the high population within the planet which consists mostly of miners and cargo handlers.