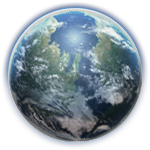 Originally settled by a group of pirates called the Lorell Raiders, the planet Hapes later became a neutral system when the Jedi Knights wiped out the Raiders when they started making raids into Old Republic supply centers. The surviving women swore never to let a man run the government following this defeat. The system was later overrun by the Empire, but Ta'a Chume (the Queen Mother at the time) built a powerful armed force and drove the Imperials out. The Hapans are known for their belligerence. The planet orbits the star Hapes and has been the seat of the Hapan government for as long as anyone can remember. The planet has seven moons. The light from these moons, as well as from the star Hapes, has caused the natives to lose much of their ability to see at night. The average day on Hapes lasts 22 standard hours, and the year on Hapes encompasses 240 local days.