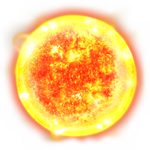 Saki Prime is found in the Exxorleth system and is one of the most ancient suns in the galaxy. As with most aged stars, Saki Prime has dimmed into the orange-red spectrum as it moves ever closer to its own extinction. It is unique in that its composition is rich in an extremely rare compound known as Sakindium B. It has recently been discovered that Saki Prime once had a sister star, Saki Minor. Saki Minor was eventually dissipated by the pull of Saki Prime's much stronger gravity well, and the two became one. The fusion of these two unique gaseous bodies is believed to have produced this rare compound for the first time in this galaxy. Many believe that Saki Prime, its orbiting planet Sakiya, and the indigenous race there, all bear the name of this infamous compound due to its ties with a lost culture long ago.

Long before many of the current races evolved to sentience, the Exxorleth system produced a race of beings that have since faded into the realms of history and myth. Their true name has been lost through the annals of time, but they are sometimes referred to as the "Sakrans." These Sakrans focused their supreme intellects on genetic and psychokinetic engineering to continually improve their minds. But in an evolutionary irony, as their creativity, artistry and logic increased, their physical constitutions gradually weakened. Plagues and infirmity began to spread throughout the various settlements until the Sakran scientists had no choice but to turn their trained minds toward survival.

It was at this time that the secondary benefit of Saki Prime was discovered. The sun had already supported the Sakran civilization for a century of centuries by nurturing their home planet and its endless variety of plant and animal life. Now, it was hoped that it could be harvested to revitalize the ailing race as well. Sakran scientists discovered that Sakindium B, in its purified form and in carefully measured dosages, could be introduced into the bloodstream to produce vast improvements in the immune system. Sakindium B-injected patients were often able to fight off life threatening viruses they had battled for months or years in a matter of days. They also experienced boosts to overall stamina and strength. The Sakrans rejoiced in the belief that their enhanced intellects and scientific knowledge had saved their race from their own short-sightedness.

Alas, it was not to be. Saki Prime held more tightly to its precious Sakindium B than the Sakrans could have imagined. Sakindium B-infused solar activity produces a particularly lethal radiation which was beyond the shielding techniques of the Sakrans, or of any known culture. Space stations, science vessels, and unmanned probes were sent to gather the substance, but all were destroyed or forced to turn back prematurely with only a limited supply. The Sakrans therefore poured increasing amounts of resources into the development of filtering/shielding technology to eliminate Saki Prime's radioactive effects on both tissue and technology. The financial drain resulted in catastrophic losses in food production, medical research, and economic balance. Many of their brightest scientific minds were lost to the deadly radiation, and their society buckled under the weight of increasing medical demands. The Sakrans ultimately lost the race between scientific advancement and their own mortality.

Saki Prime, however, continues burning on; holding selfishly to its precious life saving, and deadly, Sakindium B.