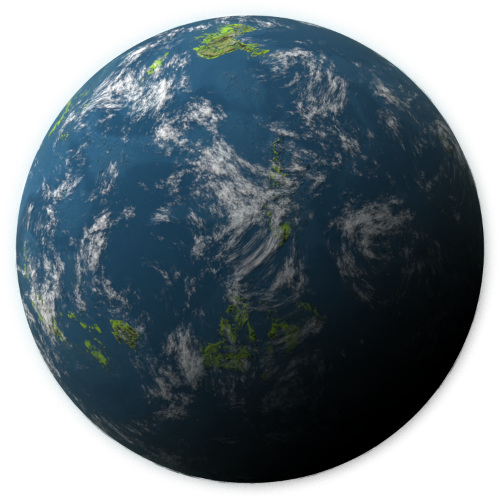 Ando is the homeworld of the Aqualish; a belligerent, war-loving species. It is almost entirely covered with water, with only ice caps at the poles and island archipelagos dotting the endless blue seascape. The Aqualish race is divided into two sub-species: the terrestrial Quara and the aquatic Aquala. The Quara are the smaller of the two divisions, making up barely 10% of the population, but they are more technologically advanced and live on the many small islands, most of which are little more than swampy hummocks enshrouded by a thick, steamy mist. The Aquala tend to live on floating rafts and offshore platforms and there are frequent, bloody wars between the two factions.

The timely arrival of an Old Republic spacecraft interrupted one of these racially fuelled wars, causing the xenophobic Aqualish to band together. They attacked the exploration vessel and killed its entire crew. Some legends say it was the Corellians who first came to Ando, while others say it was the Duros. All agree, however, that the offworld interlopers were defeated and the Aqualish acquired the gift of advanced technology. It was shortly after this that another war started, culminating in the devastation of Ando’s sister world of Ando Prime, rendering it a cold, desolate world. The Old Republic navy stepped in, implementing a demilitarisation scheme, officially known as the “Ando Demilitarisation Observation Group”, of which several prominent Jedi Masters were members. This scheme aimed to assimilate the warlike Aqualish into galactic society, stripping all of their hyperdrive equipped starships of weaponry.

Unfortunately for the Aqualish, when the Empire later came to subjugate the planet, they had little weaponry with which to fight back, but they did so anyway, causing enough trouble for the Empire that they turned the planet into a police state, brutally suppressing the various uprisings. The Aqualish hated the Empire, but showed no real interest in the Rebel Alliance officially. Eventually, the Falleen Federation navy liberated the system, giving them back their relative freedom, for which the Aqualish have shown unusual gratitude.

There are a few cities on the larger islands, but the only spaceport resides in the capital, Quantill City. It is a remarkably beautiful city for such an aggressive and belligerent race, built at the top of a large crystal cliff that overlooks the Quantill Straight, a long, narrow stretch of sea between two of the largest islands on the planet. The city is ruled over by the Quara High Council. It is also where the Andoan Senate and offworld embassies can be found, such as they are.

On a water world like Ando, metals already have inflated value, but the metal taken from native mineral-fish would be expensive even in the Core. Not only are the mineral-fish shells harder than plasteel, they're also highly resistant to energy weapons and never corrode except in the most acidic environments. It is, therefore, no understatement to say that the mineral-fish industry drives the entire Andoan economy. The Empire spent many years trying to discover the secrets of the mineral fish’s refinement processes, though rumors suggest that this was eventually abandoned in favor of more lightweight personal shield generator technology.