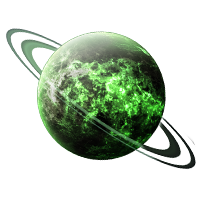 In some ways, the exposed, snowy tundra of Nyrvona offers an obvious contrast to the heavy jungles of Ylesia. It has often been said, though, that the world is much like a shadow version of its more hospitable neighbor... or perhaps its ghost.

The sky here is also blue-gray, with a shade only slightly darker than that of its sister world. It is far gloomier, though, because of the constant, unbroken cloud cover. Like Ylesia, this is a very watery world, but it is slightly smaller, and because it does not rotate quite as rapidly, Nyrvona has far less turbulent weather patterns. However, navigating to the surface here presents its own challenges, as the cloud layer is nearly a kilometer deep in most areas. From the surface, the star Cha Raaba is only dimly visible.

Still, beneath the snow and ice, there is life on Nyrvona. Hardy plants of an unusual biochemistry have managed to evolve and to endure in the difficult conditions. Very few rely upon photosynthesis, and those which do are highly efficient. Others must collect all of their food directly; most have far-ranging root systems. Many plants here have developed complex digestive systems that process all of the elements which they extract from the earth and water and produce very little waste. There are some parallels to this strange form of life found on a few other worlds in the galaxy, but unique particular features make Nyrvonan botany a fascinating study.

The plants of the world, while interesting, have never been put to any practical use, mostly due to the fact that all, without exception, are deadly poison to all known lifeforms. Transplanting of some alien plants to Nyrvona should be possible, but has never yet been attempted.

The air of Nyrvona has scant trace of any actual toxins. It does not irritate the lungs or organs of oxygen-breathers, and even has a fairly pleasant, if strange, odor. It can be comfortably breathed for several minutes before one passes out and begins to die from oxygen deprivation. The simplest of breath-masks are quite sufficient for long-term survival on this world.

One feature of Nyrvona not seen anywhere else in the system are the extensive ranges of volcanoes found over large areas. Around them, the ground is constantly heating and cooling. While much of this frosty planet is piled in ever-growing snow drifts, the geothermal energy released as each wave of lava hardens is the cause of most of the evaporation that keeps the skies so cloudy. Even the most clinical of surveys have noted this as a fascinating balance in nature.

Average temperatures in most areas range from 10 to -10 degrees Celsius, making living here possible, even without much technological aid, though it would be difficult and mostly unpleasant.