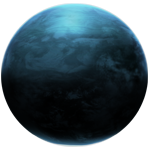 Simang is a gas giant in the far reaches of the Taanab system and is orbited by a single moon. Simang's distance from Tive, the system's star, and the planet's size have resulted in an extraordinarily long orbit and rotation period. This distance has also produced frigid temperatures and the outer layers of the planet have frozen into icy, crystalline cloud formations. These formations make navigation into any but the outermost atmospheric layers nearly impossible, while the high pressure deeper inside the planet keep the compounds that comprise Simang in different liquid and gaseous states, further increasing the difficulty of navigation.

The earliest explorers of the planet concluded that Simang was not suitable for either colonization or mining. This early declaration, in addition to the planet's distance from the system's population centers at Taanab or Taum Reese, severely limited settlement even millennia later. The only permanent settlement is a small outpost tasked with maintaining the planet's defenses and assisting any endangered vessels in the distant corners of the system.

The planet has never been considered to have much strategic value to either military forces or the economy. In recent years, several top researchers have lobbied the system's government for permits to construct a state of the art observatory in orbit of Simang, citing its lack of light pollution and slow orbit as preferable conditions. If approved, both Simang and its lone moon could begin to garner a sliver of galactic notability.