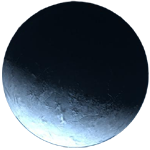 Kuna`s Tail V is best described as a frozen ball of ice floating in the mid-reaches of the Kuna`s Tail system and is easily in the running should anyone decide to hold a competition to find the smallest, coldest planets in the galaxy.

Interesting in terms of its dichotomy with its larger, hotter cousins, the differences between them stem chiefly from location and the small cloud of asteroids near Kuna`s Tail V. These asteroids serve to shield the small world from a great deal of the radiation from the sun. If it had been located as near to the star as some of the other worlds in the system, these would likely have long since been pulled from their orbit. Instead, they allow Kuna`s Tail V to serenely float through space in its coating of ice.

Given the complex interaction of its asteroid fields, the gravitational pull of its neighbors, and its small size, Kuna`s Tail V is a windswept world with a surface virtually unbroken by any form of topographic relief. Despite lacking an atmosphere, the glaciers which cover the surface maintain a polished and pristine form, again thanks to the cloud of asteroids that forever orbit nearby. Oddly solid in their celestial placement, very few of them ever de-orbit to strike the surface. At the same time, they also protect the world from intrusion by stray meteors, taking the impacts themselves and settling into new, stable orbits.