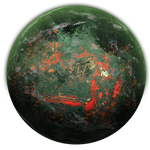 The planet Byss orbits in a figure-eight pattern around the Besqek System. It is an arid, harsh, and uninteresting planet covered in deserts and plains which contain more lava than water as a natural resource. The extreme conditions on the planet have necessitated the evolution of hardy creatures which can survive them. For example, the Abyssin people are a nomadic race -- their tribes are forced to wander the planet in pursuit of the rare and precious oases of water that exist on Byss.

Told among the tribes is a legend of a tranquil and forested planet filled with lakes of water before it was turned into a ruined wasteland. Some Abyssin believe in prophecies which foretell the coming of an Abyssin Sith lord who will restore the planet to its former glory, and ultimately restore order to the galaxy. Until the prophecy is fulfilled, the Abyssin have to fight over the few sources of water available.

Technology has allowed the construction of Abyssin starports and cities and has slightly raised the standard of living among its citizens. But any space travelers who land on Byss must be prepared to endure a rather unpleasant visit as the inhabitants are ruled by the violent law of 'survival of the fittest'. Thus, they do not look too kindly upon newcomers who could pose a threat to their precious natural resources.