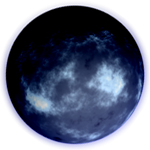 For some inexplicable reason, this planet was hit by three major asteroids which resulted in three enormous craters which can be seen from space. The rest of the planet is untouched by space objects but consists of only barren rock. A good possible source of minerals, this planet has yet to be explored. Resource consents have been given to the Commerce Guild for future prospecting but as of yet, there is no indication as to whether mining will commence.